All you need to know about Marburg Virus Disease

The Ghana Health Service (GHS) on July 18, 2022, disclosed that Ghana had recorded its first two cases of the Marburg Virus Disease (MVD) since its outbreak started across the world.

According to the GHS, the two cases were recorded in communities in the Ashanti Region and have resulted in nearly 100 Ghanaians being quarantined.

But what is MVD and should Ghanaians be really worried about its outbreak in the country?

Here are some of the important information about the MVD as provided by the GHS.

MVD caused by the Marburg virus is a rare but severe haemorrhagic fever that affects both humans and non-human primates, and fruit bats are natural hosts of Marburg virus.

According to the United States Centre for Disease Control (CDC), the virus was first identified in 1967, during the outbreak of hemorrhagic fever that occurred simultaneously in laboratories in Marburg and Frankfurt, Germany and in Belgrade, Yugoslavia (now Serbia).

The Marburg virus is transmitted to people by animals and spreads among humans through human-to-human transmission from direct contact with body fluids, blood, and other discharges from the affected person/animal.

The incubation period for the disease is two (2) to twenty-one (21) days. Treatment is symptomatic

The disease can spread from infected animals such as bats in direct contact with blood and other body fluids including bat faeces. The risk of bat-to-human transmission can be reduced by avoiding exposure to mines or caves inhabited by fruit bat colonies. All animal products (blood and meat) should be thoroughly cooked before consumption. There is currently no vaccine available.

The public is therefore advised to avoid contact with such animals. Marburg virus disease can also spread from an infected person to another person.

The public is therefore advised to avoid direct contact with people showing the symptoms indicated above and to encourage such people to report to the nearest health facility for appropriate assessment.

Read the full statement issued by GHS on the virus: 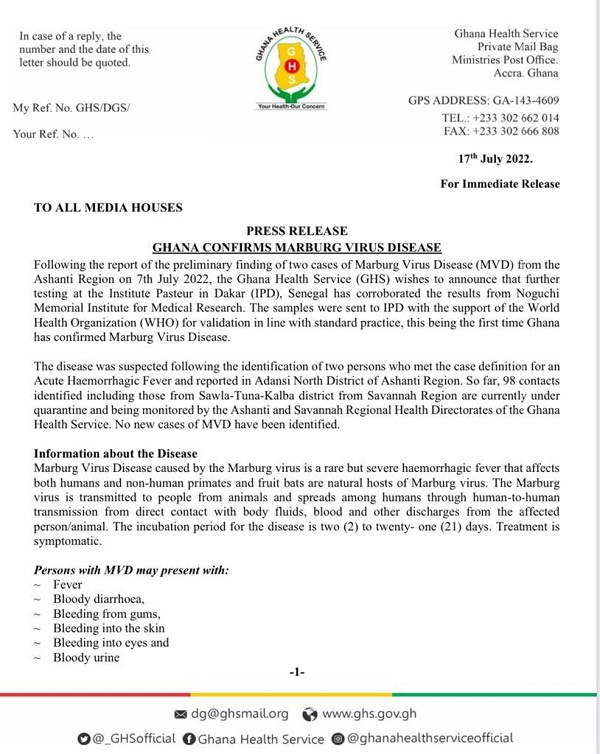 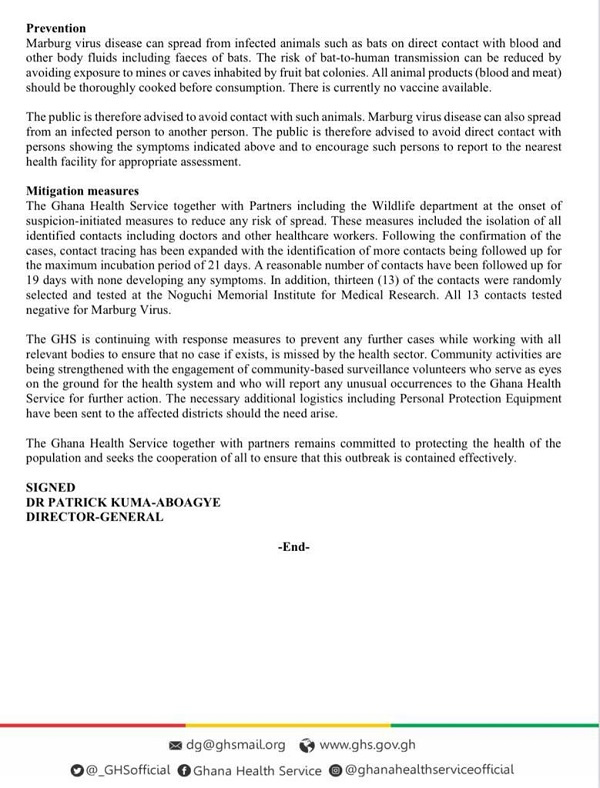