Former President John Agyekum Kufuor has dismissed media reports to the effect that he had invited the 98 NPP MPs threatening to boycott the 2023 budget presentation should the current Finance Minister go ahead to read it in parliament.

GhanaWeb carried the news from content partner, Starr News, in the morning of Thursday, November 17.

Starr News claimed the purported meeting was “for the former leader to resolve the standoff that has prevailed over the past weeks,” without any further details.

In a statement issued later in the day, aide and spokesperson of the former president Dr. Kwabena Osei-Adubofuor stated: “We wish to bring to the attention of the general public that there is no truth to the said publication.

“The office of the former President vehemently detests the developing trend in disinformation that mischievously seeks to draw President Kufuor into issues that he has not commented on,” the statement added.

Read the full statement below 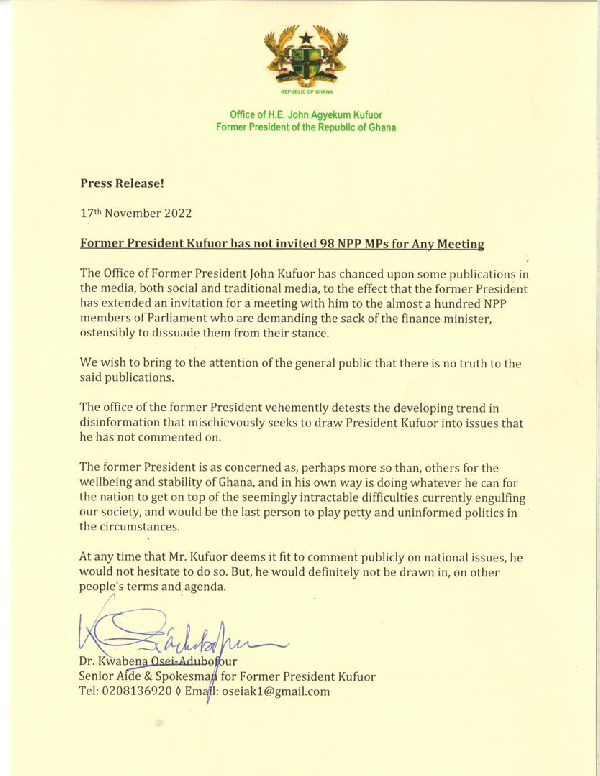 Minister of Finance Ken Ofori-Atta is undoubtedly Ghana’s most talked about politician. The demand for his dismissal increases by the day amid an economic crunch he is accused of presiding over.

Ofori-Atta was nominated by President Nana Addo Dankwa Akufo-Addo and was subsequently passed by Parliament after a vetting process. This was his only legal route to the position of Minister.

The way out of that office rests on himself (via resignation), on the president (dismissal) and on Parliament (via a vote of censure).

The first two processes would seem easier but they don’t seem like the easiest way out. Ofori-Atta has refused to resign and the president insists he has done and continues to do a good job of managing the economy hence repelling calls for his dismissal.

Parliament, however, is officially and unofficially piling on the pressure to have Ofori-Atta removed. Per GhanaWeb’s count, over 230 MPs (entire Minority bloc and an anti-Ofori-Atta bloc in the Majority Group) are currently asking that the Minister be removed from office.

It so happens that the route they are using is different but the end goal is for the embattled minister to exit the Ministry of Finance.

All 137 Members of Parliament from the Minority Caucus signed a vote of censure motion seeking his removal. That motion has birthed an 8-member ad hoc committee that is sitting on the matter.

From the Majority benches, 98 MPs are calling for the immediate removal of Ofori-Atta, less than a month since they made their first call and backtracked on same after a meeting with the President.

137 from the Minority Caucus plus the 98 NPP MPs brings the number of lawmakers seeking Ofori-Atta’s exit to 235 out of a House of 275 members.

Andy Kwame Appiah-Kubi, the Member of Parliament for Asante Akim North in the Ashanti Region and leader of the ‘Ken Must Go’ MPs in an interview on November 15, 2022, on the PM Express programme on JoyNews, Appiah-Kubi stated:

“Our position has not changed and we still believe Ken Ofori-Atta must go. We will not do the President’s business through Ken Ofori-Atta. Any other person that comes, we will deal with them.”

The embattled Minister is currently the subject of a vote of censure and is appearing before an ad hoc committee of Parliament to have his say on seven grounds brought against him by the minority Caucus.

“The process through the vote of censure will come back to the President with a prayer that he relieves him of his duties. The onus is on the President to sack him or for the Minister to resign. There is nothing personal in our call for his sack. We are not afraid to be victimized,” he added.

How the Spotify layoffs impact its podcasting business

Kufuor cried, begged me to return to Ghana to save him from coups – Rambo

Presidents must have courage to reshuffle their ministers – Kufuor